About the American Eagle Foundation

The American Eagle Foundation is a not-for-profit 501(c)(3) organization that cares for, restores, and protects the USA’s living symbol of freedom, the bald eagle, and other birds of prey. Since 1985, the AEF has been carrying out its mission through conservation, education, and rehabilitation. The Foundation’s headquarters are located in the foothills of the Great Smoky Mountains in partnership with the Dollywood theme park in Pigeon Forge, TN. 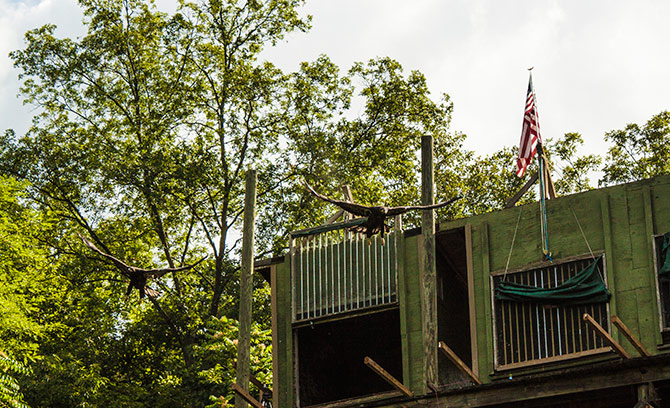 Hacking is the method used to simulate Eagle nesting and Eagle population recovery in a particular area by releasing fledgling Eagles into the wild from an artificial nesting tower.
The AEF’s Hacking program has resulted in the the release of 180 young Bald Eagles into the foothills of the Great Smoky Mountains in East Tennessee from 1992 through 2020. 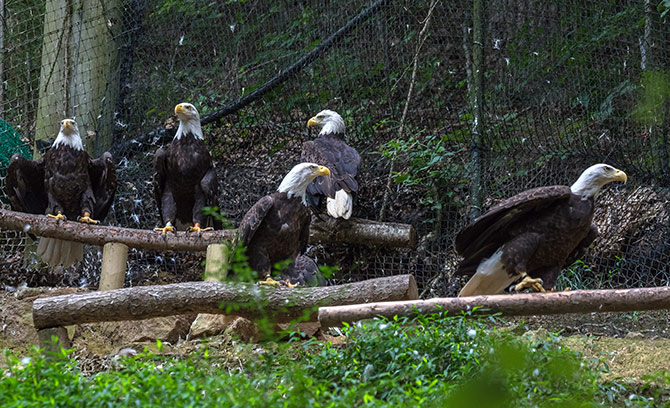 The largest exhibit of non-releasable Bald Eagles in the United States.

The Bald Eagles residing within Eagle Mountain Sanctuary are all permanently disabled and would not be able to survive in the wild. These birds are cared for daily by AEF staff who provide fresh water and food and who visually ensure that the Eagles are in good health. They are given complete physicals once a year when their enclosures are inspected and renovated. 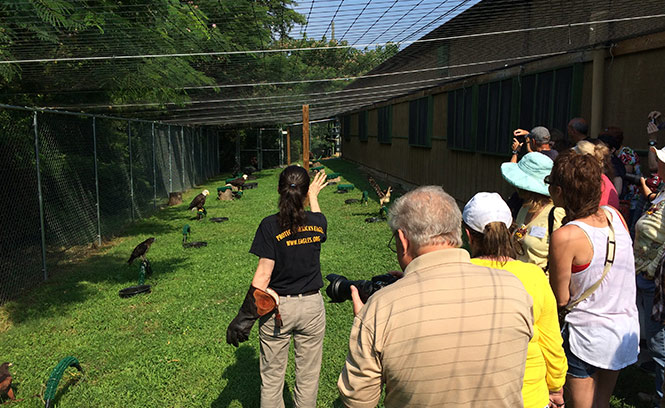 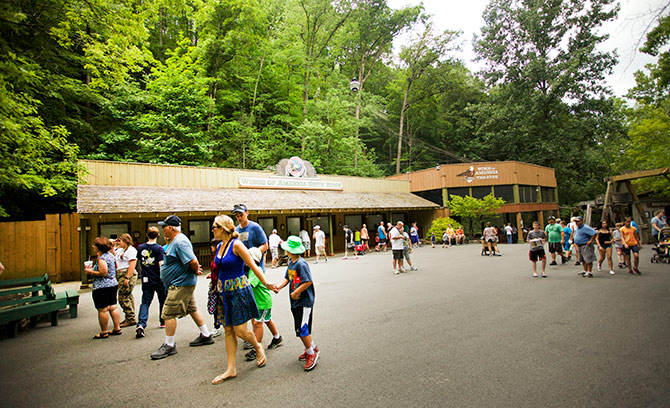 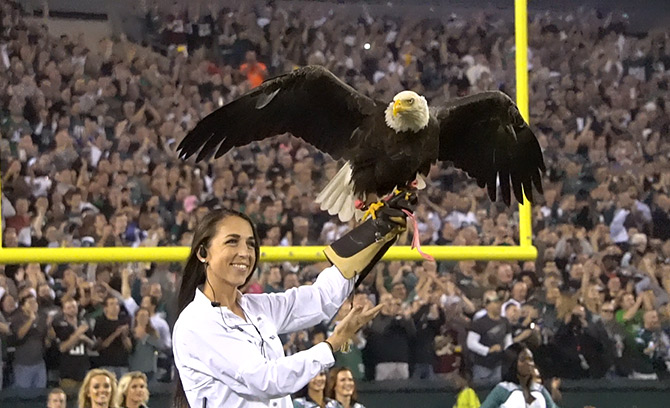 Challenger lands on the glove of Laura Sterbens at a NFL football game. 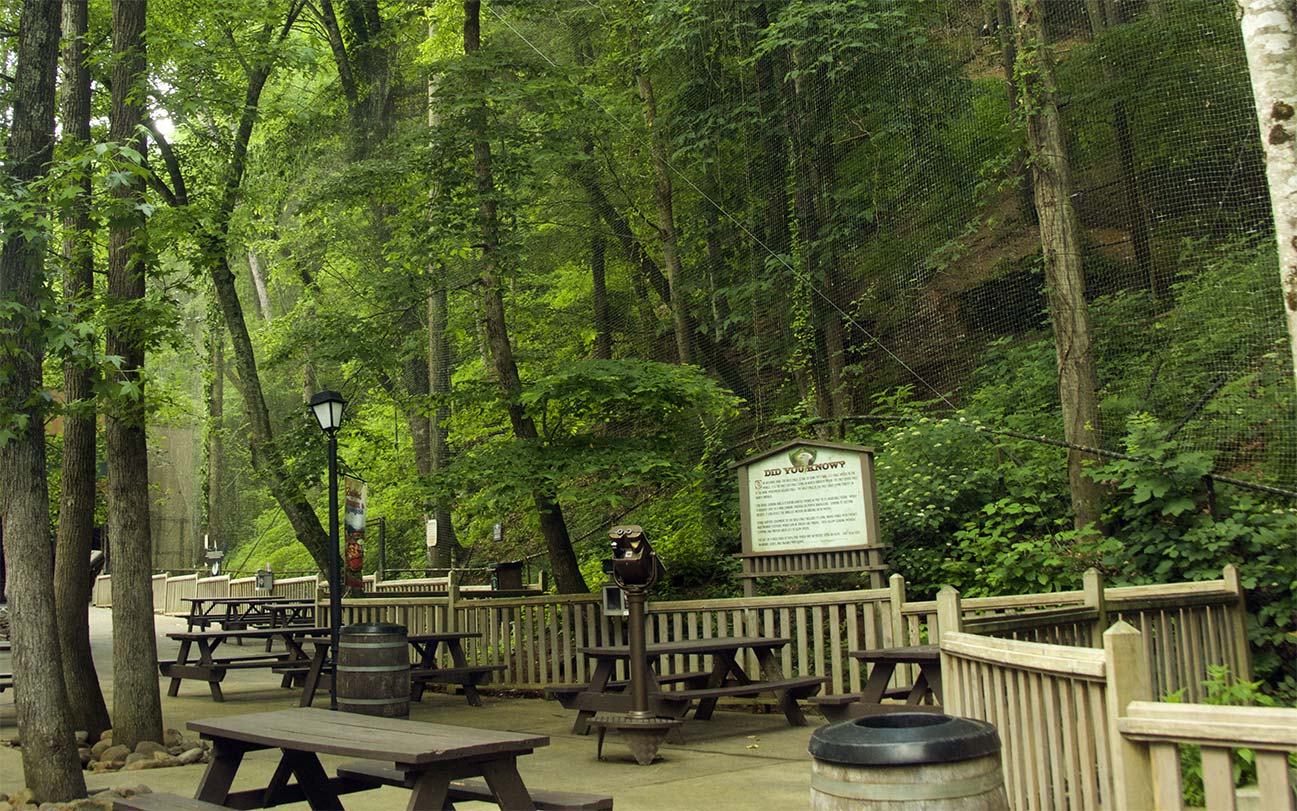 Eagle Mountain Sanctuary encompasses 400,000 cubic feet on the side of a heavily wooded hillside.
The exhibit can be viewed by the public from March through the first week in January, while the Dollywood theme park is open to the general public.

Since 1985, AEF has educated millions of people throughout the United States on conservation of the eagle and all birds of prey. In 1990, the AEF entered into a multi-year corporate partnership with the Dollywood Company and cooperated with them to develop Eagle Mountain Sanctuary at Dollywood in Pigeon Forge, Tennessee. Eagle Mountain Sanctuary is the largest gathering of non-releasable bald eagles found in the world.

Through a deeply passionate commitment to conservation and educational outreach, the American Eagle Foundation, a 501(c)(3) organization, is dedicated to inspiring the global community to guard and protect the Bald Eagle and all birds of prey.
This mission is carried out in a variety of ways through our three main pillars: Conservation, Education, and Rehabilitation. A team of full time employees, part time employees, and volunteers put the three pillars into action.

The AEF cares for over 70 non-releasable raptors and other birds daily, including the world’s largest collection of non-releasable Bald Eagles who reside in Eagle Mountain Sanctuary. These birds are non-releasable due to permanent physical disabilities or human imprinting/socialization.  The AEF supports Bald Eagle conservation around the country by issuing nearly $100,000 in Bald Eagle Grants annually. Challenger the Bald Eagle has been a catalyst for spreading awareness about Bald Eagle conservation. Traveling coast to coast, Challenger inspires millions of Americans through live news broadcasts and free-flight demonstrations and appearances at major league sporting events, conventions, and schools.
As of 2019, the AEF has also partnered with Yuengling to help support their mission to conserve and protect eagles. Today, the AEF has grown into an internationally recognized conservation organization.

The American Eagle Foundation is dedicated to educating the public about Bald Eagles, birds of prey, and the importance of preserving these species for future generations.

The AEF’s educational outreach ranges from the Wings of America Birds-of-Prey show at Dollywood, to educational programs at schools & veteran facilities across the United States, to appearances at professional and collegiate sporting events, conventions, trade shows and special events throughout the country. The organization has successfully performed over 25,000 “free-flight” birds of prey education programs since 1991 using non-releasable trained birds.

Since 1995, the AEF’s famous non-releasable, trained free-flying Bald Eagle “Challenger” has made over 350 educational free-flight performances across the US and hundreds of educational school programs and other appearances.  The AEF conducts these programs and flights with the licensed permission of the U. S. Fish & Wildlife Service and various State fish and wildlife agencies.

The AEF’s Educational Bald Eagle Nest Cam Program has grown exponentially since its inception. These LIVE high-definition nest cams featuring captive and wild Bald Eagle nests in Tennessee, Florida, and Washington, DC have captivated millions of viewers from around the globe.

The AEF rehabilitates injured Bald Eagles and other birds of prey and releases them back into the wild, ideally close to where it was found. If their injuries are beyond repair, they are given a permanent home at the AEF or another raptor facility.  In addition to the treatment of injured, sick, and orphaned eagles, AEF’s Eagle rehabilitation qualification is an important factor to its successful daily care of brooding Eagles, their young, and Eagles being hacked for release.

Since 1992, AEF has released  166 young bald eagles into the foothills of the Great Smoky Mountains in east Tennessee from an artificial nesting tower. Most of these Eaglets have come from the AEF’s non-releasable Bald Eagle breeding pairs (who chose each other as mates in captivity), while the others have been transferred to the AEF from zoos, raptor facilities, and wild nests from around the country.